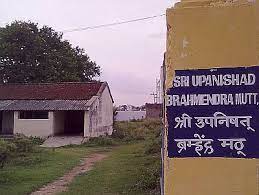 Upanishad Brahmam was born to a Sanskrit scholar of Vadhula gotra named Sadashiva and his wife Lakshmi in Brahmapuram, a village on the banks of the river Palar. He was named Sivarama. He was married, had a son, spent his life as a householder, and then renounced his life and became a sanyasin. His ashrama was set in Agastyashrama in Kanchipuram, on the way to Kailasanatha temple. He took an arduous task of writing a commentary to 108 upanishad-s and hence got the name Upanishad Brahmendra. He was a Sri Rama upasaka and installed a Sri Rama yantra made of Saligrama in his ashrama. His works project him as a Advaita sanyasin, who also extolled and propagated the cult of ‘nama sidhdhanta’ singing ‘bhagavan-nama bhajana’. His compositions bear the mudra ‘ramachandrendra’. Though the exact period of this yati cannot be ascertained, we can clearly say he lived during the middle of 18th century from his own statement,

(‘prajOtyabdhacapaikAdashaghasrE ShubhE dinE bhaumAshvinyAm idam ShAstram sampUrNapadavIm gatam’). This means he has finished writing commentary for Muktikopanishad in the cyclic year Prajotpatti, Markazhi mAsa, EkAdasi, ASvini nakshatra falling on a Tuesday, which corresponds to the 30.11.1751. A detailed biography of Upanishad Brahmam can be learned from the essays of Raghavan.1,2

Upanishad Brahmam gains more importance due to his connections with Tyagaraja Svamigal and Muthuswamy Diksitar. Upanishad Brahmam was acquainted with Sri Ramabrahmam, father of Svamigal. Perhaps, Sri Rama upasana, a common thread between these three mahaniyA-s united them. It is said a ‘srImukham’ written by Upanishad Brahmam, inviting Svamigal to visit Agastyashrama is available in the manuscript collection preserved at Saurashtra Sabha, Madurai. Later, Tyagaraja Svamigal, during his sojourn to holy sthala-s like Tirupati, Lalgudi, etc., visited Kanchipuram. Needless to say, this rendezvous could have resulted in the discussion of the tenets of nama-sidhdhanta and Sri Rama nama mahima.

Though Upanishad Brahmendra has composed many divya nama kirtana-s, this article focuses on two of his works, namely ‘sri rama taranga’ and ‘sri rama ashtapadi’. The word ‘taranga’ immediately reminds us of the work of Narayana Tirtar  ‘Sri Krishna Leela Tarangini’. This work describes the divine sports of Krishna Bhagavan in a simple, flowing Sanskrit. The ‘taranga’ of Upanishad Brahmendra describes the lilAnubhUti-s of Sri Ramachandra, again in the divine language Sanskrit. Raghavan, as mentioned earlier, had made a note about Rama tarangamala in one of his essays. The manuscripts in the possession of Raghavan are now preserved at The Theosophical Society, Adyar, and forms a major source for this article.

The tarangamala appears to be much complex in structure. From the descriptions provided by Upanishad Brahmam as introductory verses, it can be speculated the Rama tarangamala had 16 khanda-s or chapters. The author says,
“षोडशकलाभिधानास्तरङ्गमाला गले समर्प्यन्ते” (‘sOdaSakalAbhidhAnAstarangamAla galE samarpyantE’), meaning the taranga-s, sixteen in number similar to the (sixteen) kala-s of moon are being offered.

A composition named as ‘AhvAna taranga’ in the raga Nata begins the work tarangamala. The musical structure and tala of this composition are not available. This composition starting as ‘AgachchAgachcha mE’ is basically an invocation inviting or calling Sri Ramachandra. This can be roughly equated with the kriti ‘hechchariga gA rA rA’ of Svamigal in the ragam Yadukulakambhoji. This composition ‘AgachchAgachcha mE’ is a dvi-dhatu composition – having pallavi and 12 carana-s. A striking feature seen in the compositions of Upanishad Brahmendra is the lack of ‘dvitiyAkshara prAsa’, the second letter concordance. His creations are more in line with the sloka-s written by Sanskrit theologists like Adi Sankara, Vedanta Desika, etc, distinguishing them from the compositions created by the composers belonging to his period. Interestingly, anuprasa is used profusely in many of the carana-s. The usage of ‘putra’, ‘gAtra’, ‘caritra’ and ‘kalatra’ in the first carana, ‘vinda’, ‘kanda’ and ‘govinda’ in the third carana and ‘ShitAsu’, ‘ganEShu’ and ‘mAnEShu’ in the seventh carana can be cited as examples.

Now begins the first khanda of tarangamala. After three invocatory verses, starts the first Taranga ‘srI rAmacandra’ in the raga Mohanam. This Taranga appears to be much intricate, not because of 12 charana-s, but because of the structure of each carana.  Each carana begins with a sahitya, followed by a jati, a svara passage, and a segment of sahityam. In few carana-s, this order is slightly altered. It can be interpreted the svara segment actually corresponds to the sahitya that immediately succeeds it due to the svara-sahitya relationship they share. The svara-s, short, and long match exactly with the hrsva and dIrghAkSharA-a available in the sahityam succeeding the svara segment.

The structure gets more complicated as we move to the eighth caranam. Here, the author has mentioned the jati is to be rendered in dhruva tala. Similarly, it is prescribed in the ninth carana that the jati therein is to be rendered in rupaka tala! The tala specifications is applicable to jati alone or the entire carana cannot be ascertained. If the entire carana is to be rendered in the specified tala with each carana having a different tala, the taranga appears more like a suladi. This assumption can be made only if we get to see tala specifications for all the components and carana-s of this composition, which is not so in this case. The carana having a jati, sahityam and svara passage resembles another musical form prabandha. Again, not all the components, which a prabandha must have is seen here. However, we can definitely say we are looking into a special musical form, which was either invented by Upanishad Brahmam or a form available to the composers of that period!

This Taranga also opens another interesting discussion. From the svara passages, we can get a glimpse of the raga Mohanam used by Upanishad Brahmam. The svarupa of the raga seen here is much similar to the raga extant now. A glance into the history reveals the existence of another raga with the same name, but with a different structure. This defunct raga had six svaras and can be seen in the texts ‘raga lakshanamu’ and ‘sangita saramrta’ of Saha Maharaja and Tulaja respectively. This shadava Mohanam gains importance as the period of Upanishad Brahmam is much closer to the period of Saha (1684-1712) and Tulaja (1677-1736). The mentioned kings also have recorded the present-day Mohanam having five svaras,  but preferred to call it Mohanakalyani.3 Upanishad Brahmam, using five svaras, yet calling it Mohanam is really intriguing. The ‘rama taranga-s’ stop abruptly at this point and leads to another work of Upanishad Brahmam, namely Sri Rama Ashtapadi.

The individual compositions are referred to as gita-s and each gita has a pallavi and eight carana-s, fashioned in line with the celebrated ashtapadi-s of Jayadeva Maha Kavi. From the material available, it can be presumed that the gitas were arranged into 16 khanda-s, each khanda-s having eight gita-s in all the vibhakti-s.  The khanda-s also have introductory verses and a gita preceding the proper ashtapadi gita-s. This introductory gita alone has 13 carana-s.

We are indeed seeing the ashtapadi-s tuned by Muthuswamy Diksitar! As with the Taranga-s, the ashtapadi-s too are incomplete (in this manuscript) with only eight of them available – one preceding gita and seven from the vibhakti set. The preceding gita ‘srI rAma tubhyam’ was set to the raga Bilahari. (Raghavan considers this as the gita representing the eighth vibhakti in the vibhakti set). Tala was not marked for any of these gita-s. The contents of the first khanda are as follows:

It is interesting to note the members of the clan Mayamalavagaula, a favorite of Muthuswamy Diksitar not dominating. However, this statement can be validated only if we happen to get the raga of the rest of the gita-s. Of these eight ragas, two ragas have a composition composed on the deities residing in Kanchipuram, namely ‘kAmAkshi varalakshmi’ in the raga Bilahari and ‘cintaya mAkanda’ in the raga BhairavI. The raga of the gita representing the fifth vibhakti is missing. What could be the missing raga? A raga used by him in one of his  Kanchipura kshetra kritis or otherwise?

The composition ‘rAmacandrasya tava dAsOham’ provides material for a case study. The opening lines was used by Muthuswamy Diksitar in his Purvi raga kriti ‘srI guruguhasya dAsOham’, a member of the ‘guruguha vibhakti’ set. Apart from the similarity in the sahitya, the concept propounded also looks similar. Upanishad Brahmam declares he has united with his Lord Sri Ramachandra in this kriti. Muthuswamy Diksitar proclaims the same in his kriti ‘anandEsvarENa’, wherein he says ‘brahmAnandOsmi’!

Though the structure was much designed to be in line with the ‘gita govinda’ of Jayadeva, few differences too exist. First, the theme seems to be non-erotic. Second, the ashtapadi-s does not seem to explain a story. However, these can be conclusively said only if the sahitya is read and analyzed by a scholar.

We are looking into the kritis of a Sri Rama Upasaka who has influenced and shaped the thoughts of our beloved composers Tyagaraja Svamigal and Muthuswamy Diksitar. The sahitya of these compositions are to be studied in detail to understand the tenets of Upanishad Brahmam. Let us  hope to get the Taranga-s and Ashtapadi-s in full with the blessings of Ramachandrendra.

I thank the authorities of The Theosophical Society, Adyar for allowing me to peruse the required manuscripts.

I thank Smt. Vidya Jayaraman for translating the verses seen in taranga-s and ashtapadi-s.