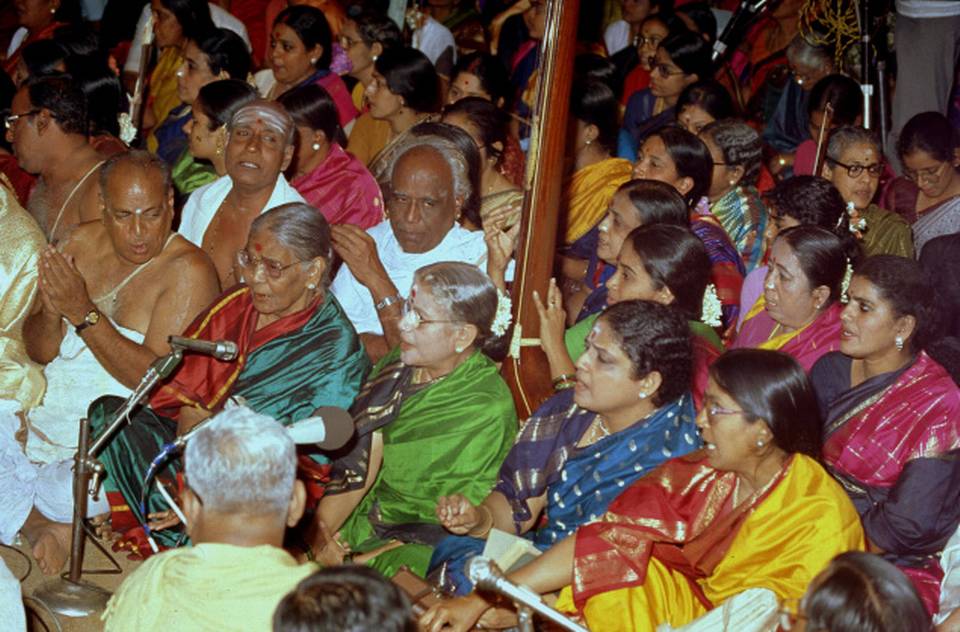 The composition and the raga need no introduction to a listener of our Karnataka Sangeetam. This blog post is about certain aspects of the raga on one hand and the way the composition has come to be handled over a period of time.

The composition ‘Sukhi Evvaro” is very ubiquitous and the raga even more, for varied reasons as it can be considered to generate greater ranjakatva with both the lay listeners as well as the cognoscenti. So much so the kriti and the raga has come to be handled commonly that the raga as it was and the kriti as it was perhaps, has now come to be forgotten.

While I embark on my narrative, I am not going to deal with the origins of Kanada or its meandering history. Instead I first present the contemporaneous version of the raga and the kriti and then go back by about 100 years just to savour the probably original version that was in vogue then. And this blog post is only about the kriti ‘Sukhi Evvaro” and the Kanada or perhaps its version that was native to it. Nothing else.

Musical texts of today would place Kanada as a upanga janya of the 22nd Mela with a nominal arohana/avarohana krama as under:

The Kanada we deal with in this blog post is the one with kosher phrases, marked by a well oscillated gandhara and taking the svaras as above and nothing else. The leitmotif of the raga is the GMRS marked by the oscillated gandhara. The raga in this form and name cannot be traced back to prior to 1850 AD and its present form and contours that it has taken have been more or less between 1850-1950 AD. Suffice to state that none of the authentic pre 1850 AD texts talk of this raga. In fairness it has to be further stated that the melodic Chaya or svarupa that it shares with its sibling ragas such as Karnataka Kapi or Durbar contributes to our confusion about the origins of this raga.

Be that as it may, for the limited purposes of this blog post, the above contours of the raga would suffice along with the following classical features or lakshana of Kanada for which I cite the authority of the commentary provided by the revered Prof. S R Janakiraman (Prof SRJ) in his work, as under:

When we absorb the commentary as above provided by Porf SRJ, it can be observed that the lakshana of Kanada is characteristically of the 18th century model which we had seen in previous blog posts. The progression of a raga being characterized with jumps, bends, turns and twists with the result that there is no preordained or unique progression in the purvanga or uttaranga section of the raga, is seen in Kanada as well.

Discography for Kanada- The two varnas:

It is to be pointed out that students as well as listeners of music ought to first train their ears and learn or understand the proper lakshana of this raga and hence as prescribed by Prof SRJ, firstly I present the two varnas which may please be heard profitably before we move on to the proper subject matter of this blog post.

I present first the Ata tala varna rendering by the mellifluous Sangita Kalanidhi Smt M S Subbulakshmi, for her clarity of rendering – sahitya and svaras stanas.

I next present ‘Nera nammiti’ by the legendary Sangita Kalanidhi Smt T Brinda, who in this AIR Concert recorded in the autumn of her performing career, still brings to life the composition learnt by her from her mother or grandmother who in turn learnt it first hand from the composer himself, Tiruvottriyur Tyagier.

I invite the attention to the intonation of the gandhara, which is in the lower bounds of the permissible frequency for the sadharana variety of the note. It can be said with the authority of Prof SRJ and with the exemplar rendering of the varnas by Smt M S Subbulakshmi and Smt T Brinda, as above, that the defining aspect of Kanada is the way in which the gandhara is to be intoned. With this point noted, we next turn to the subject matter on hand.

Here is a detailed commentary on the composition along with the lyrics.  Arguably, the most popular versions of the compositions are the ones tracing back to the veterans Ariyakkudi Ramanuja Iyengar and Madurai Mani Iyer and theirs as well, which are available already in the public domain.

I however choose to present the rare and a revelatory version of the composition ‘Sukhi Evvaro’ by the doyenne Sangita Kalanidhi Smt T Brinda.

Attention is first invited to her raga vinyasa wherein she lays out the lakshana of the raga with the kriti firmly in her mind. Hark at the subtle oscillations she gives to the gandhara, the dhaivatha and the nishadha and how she caresses those notes even as she coaxes and cajoles the melody out of them, drawing upon her tutelage under Kancipuram Naina Pillai. The rishabha is perhaps the jiva svara of mela 22 ragas of yore including its ancient titular head Sriraga. And no wonder the anscestry is drawn upon for the eduppu of this composition which begins with the steady janta rishabha. Never does she deliver a sangati not aligning to this take off note.

A number of observations invite our attention to the rendering of the maestro, as under amongst others:

All these key points hold our attention making this version of the composition unique and, in my opinion, it is in complete consonance with the Kanada delineated in the varnas and thus forming the gold standard or exemplar of the raga as it was in the closing quarters of the 19th Century. With due respects to all great vidvans/vidushis of the past and the present, it has to be frankly said that much liberties have been taken both with the raga and this composition as evidenced by the renderings of the same as available tu us today.

In so far as the composition is concerned while the common complaint could be the speeding up of the kriti, yet what is especially notable is the license and liberty taken with the gandhara svara. Almost as a rule the gandhara of modern Kanada has become sharper and less oscillated than what it was once upon a time. Is it the urge to tint it with the so- called Hindustani touch to make it closer to Durbari or Malhar? One does not know. Suffice to say that the Kanada of late 19th century vintage as embodied by this version of Smt Brinda has now been lost and nowhere heard on the modern concert platform.

I leave it to Prof SRJ who in this video between 5.49 and 9.06, waxes eloquent of this version of ‘Sukhi Evvaro” of Smt T Brinda contrasting it with the version that was taught to him by the Flute maestro Svaminatha Pillai. Watch how emotional and passionate he becomes as he recounts that experiance of hearing her sing the composition. QED.

There is nothing more to be said or added and I conclude this post by leaving a thought. As a listener or as a performer one needs to constantly evolve and develop ‘discernment’ in other words, the behavioural attribute to ‘discern’ – the dictionary meaning of which is “distinguish (someone or something) with difficulty/ effort by sight or with the other senses”, the close Tamil word being பகுத்தறிதல்.

We need to discern and discover the truly beautiful versions of great works of art /composition and perhaps only listen or learn them as the case may be. ‘Sukhi Evvaro” of Smt T Brinda is a work of art, an exemplar in its true and only sense and one can’t but silently second the view of the revered Prof SRJ.

The recording of Smt T Brinda as well the renderings provided through YouTube links as exemplars are the exclusive intellectual property of the artistes concerned. The same has been utilized here strictly on a non-commercial basis, under fair use for study & research, fully acknowledging their rights and no part of it may be copied, reproduced or otherwise dealt without the consent of the artistes or the concerned IP right holders.