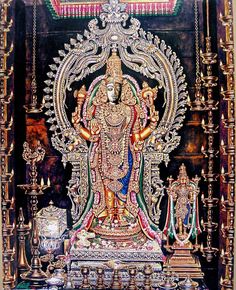 While the year 2000 was a sort of milestone for us, the year circa 1800 too was a momentous milestone in the modern history of Tanjore, the Eden of South India. It marked the end of political issues plaguing the region and the ascension of Prince Serfoji (AD 1798) as the King of Tanjore. The Kingdom of Tanjore was riven by internal strife and famine during the 1770-1800 period, so much so that many fled the region for the safety and security of Chennapatna or Madras which was under the rule of the British East India Company. It was after these tumultuous events that peace returned to Tanjore circa 1800 and the decade thereafter was marked by peace and prosperity, more particularly the first quarter of the 19th century.

Accounts of Muthusvami Dikshita’s life talk of his sojourn to Tanjavur during this time period- during the first decade of the new century on the invite of his pupils, the Tanjore Quartet Ponnayya, Chinnayya, Sivanandam and Vadivelu. The Quartette by then had firmly ensconced themselves in the Tanjore Royal Court of King Serfoji and it was then they must have invited their master/guru Muthusvami Dikshita to Tanjore, who it seems stayed for a while in Tanjore.

Legend has it that at this point in time when the Quartet played host, they requested Dikshita to compose kritis in all the raganga ragas of the Venkatamakhin tradition so that these kritis would become shining exemplars of those melodies. Accordingly, Dikshita set about the task and this stay in Tanjore produced a number of kritis in these ragangas.

Amongst those said to have been composed during Dikshita’s sojourn to Tanjore and catalogued in the SSP is the composition in the 5th Mela raga/raganga Manoranjani. Barring some of the main ragas, Dikshita seems to have composed kritis in his shorter format in these mela ragas. This shorter format lacks a full blown carana. Few exceptions to this observation are the following kritis in the raganga ragas ( not major ones) , from an SSP perspective, which are in the full blown format including a carana portion as well.

These shorter format kritis with just the pallavi and anupallavi is always appended with a cittasvara section.

In the case of the 5th Mela the composition of Dikshita recorded in the SSP is “Balambike Pahi” let us first  evaluate the raga first and then the composition, in this blog post.

The raga and the scale is obviously a post 1750 AD development arising as a part of the 72 mela scheme formulated by Muddu Venkatamakhin as the raganga of the 5th Mela taking the notes of R1, G2, M1, P, D2, N3 with the gandhara being dropped in the ascent because of the R1G2 combination being a vivadhi pair. The raga also came to be documented as a janya under the Kanakangi-Ratnangi Scheme catalogued by the Sangraha Cudamani, with Manoranjani being categorized as a janya under the 5th Mela, the heptatonic krama sampurna raga Manavati. Tyagaraja’s “Atukaradani” is an exemplar of the same.

According to the SSP, the following are the features of the raga:

It has to be noted that though the lakshana sloka provides for gandhara being vakra in the avarohana, the kriti, as pointed by Subbarama Dikshita, sports MG1R1S as well.

Here is the kriti and the meaning of the lyrics:

It is seen that Dikshita’s colophon “guruguha” and the raga mudra “manoranjani” are embedded in this composition segueing seamlessly with the lyrics, which is set in catusra matya tala (1 kalai). While the name of the Goddess as also her Consort’s name appears in the composition, there is no explicit reference to the ksetra name in the composition.

The Ksetra or Temple of this Kriti:

The kriti is on Goddess Balambika consort of Lord Sankaranarayana as is obvious from the lyrics. It has to be pointed out that Goddess Balambika is the name of the deity enshrined in Vaideesvarankovil ( vide the kriti “Bhajare Re Citta” – Kalyani – Misra Eka) with the presiding deity being Lord Vaidyanatha. And Lord Sankaranarayana is the presiding deity of the temple at Sankarankovil where his consort is Goddess Gomathi. As seen in one of the previous blogs, Veenai Sundaram Iyer has much later to the SSP published a kriti “Sankaranarayanam” in the raga Narayana Desakshi, attributing it to Dikshita,

On the contrary this kriti “Balambike Pahi” on Goddess Balambika and wherein Dikshita proclaims her as the consort of Lord Sankaranarayana and does not specify the ksetra or the temple or any reference to it in the body the kriti. There is no likelihood thus of the composition being sung on the deity at Sankaran Kovil or Vaideesvaran Kovil.

As pointed out in the prologue, we have reliable textual authorities who have recorded Muthusvami Dikshita visited Tanjore and composed on the various deities in around Tanjore, including Lord Brihadeesvara and Goddess Brihannayaki, in the ragangas of the Venkatamakhin tradition. Both Dr. V Raghavan and Justice T L Venkatarama Iyer in their works (see reference section below) have provided a narrative to this effect.

Dr V Raghavan in his famous NCPA Red Book asserts that Dikshita undertook the project to compose at least one composition in every one of the 72 raganga ragas of the Venkatamakin scheme. And he marks a number of kritis in the raganga ragas, of Dikshita and also provides the ksetra where the same was purportedly composed, based on the internal evidence. He asserts thus:

“This series ( i.e corpus of songs to illustrate the 72 ragas mela-janya scheme) is not completely available and I shall give here a list in so far as I have been able to compile it…..”

However, no reference is provided to this composition “Balambike Pahi” in his aforesaid listing in the NCPA Red Book.

Some individuals in the public domain assert that this composition is on Goddess Balambika at Vaideesvaran Kovil, without any authority whatsoever, merely on the strength of the name of the presiding Goddess which is plain misattribution. It is also seen that those who provide the meaning for the lyrics of this composition provide the meaning for the line ” Sankara nArAyaNa manOranjani” as ” O one delighting the hearts of Shiva and Vishnu! ” without realizing that the reference here is not the Lord Shiva or Lord Vishnu individually but to Lord Sankaranarayana. It is respectfully submitted that these reasonings do not hold water.

In the context of the raga of this composition being Manoranjani, the 5th mela we can surmise that:

Fortuitously the perusal of an old publication titled “Siva-Vishnu Ksetra Vilakkam” (Tamil)-see below, provides a reference to a temple in the town of Tanjore where the presiding deity’s name is Lord Sankaranarayana and the name of the Goddess being Balambika.

The book refers to the temple as being located in Tanjore mEla rAja veedhi at its southern end. Based on the said reference I have marked the same in the Google Maps below.

The said temple has also been covered in an article in a daily as well- refer the Reference section below. The temple also finds reference in the “Tanjapuri Mahatmiyam”. It is also recorded that during the reign of King Serfoji circa 1805, a consecration ( Kumbabishekam) for the temple was performed. Given that this coincides with the probable period of Dikshita’s visit, one wonders if he composed this kriti and paid his obeisance to Goddess Balambika during the festivities.

Thus, given the preponderance of probabilities and the data points agreeing, it can be deduced, that Dikshitar could have visited this particular temple during his Tanjore sojourn and composed this kriti in raga Manoranjani on Goddess Balambika enshrined there.

In so far as the history of this Temple of Lord Sankaranarayana is concerned, in his critical commentary to the work “Tanjapuri Mahatmiyam” part of the “Cola Campu” of Virupaksa, Dr V Raghavan records that the Tanjore King Bhima Chola’s wife hailed from lands of Tirunelveli and her family deity was Lord Sankaranarayana of Sankarankovil. And to fulfill his wife’s desire to worship the Lord in Tanjore itself Bhima Chola built the temple for Lord Sankaranarayana at what is today known as west Main Street, the subject matter of this blog post.

Presented first is the rendering aligned to the notation found in the SSP by Vidvan G Ravi Kiran (The video upload wrongly mentions the name of the performing artiste).

The kritis of Muthusvami Dikshita especially in the mela ragas, are pithy and are ideal to both learn and perform professionally. These compositions with brevity being their hallmark need not be be-labored upon and can be sung with a brief raga vinyasa and concluded with a couple of cycles of svaras. One fervently hopes that artistes include these compositions more in their performances in the days to come.

The renderings used or linked as above in the body of this blog has been made strictly for purposes of education and knowledge under fair use category. The intellectual property belongs to the respective artistes and the same cannot be shared or exploited without their consent.