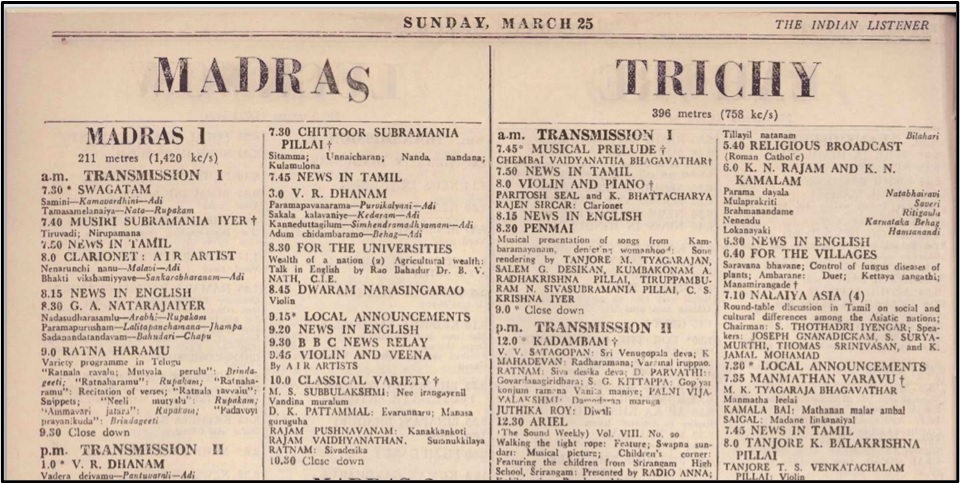 Ragas like Saranganatta, Desakshi, Samantha and Malavasri once upon time ruled the roost but today lie forgotten and unsung. Malavasri is a raga in which both Tyagaraja and Muthusvami Dikshita have composed. This blog post is to document the history of the raga in brief and introduce Dikshita’s composition to the reader of this blog.

But before that, is a prelude. The year was 1945, when the Second World War was winding down, with the day being March 25th, a Sunday. If one had tuned into the All India Radio Madras 1 Station at 10PM that day, after the rendering of  the popular “ Nee Inrangayenil” by the young and sprightly M S Subbulakshmi, the listener would have next heard the kriti of Tyagaraja in the raga Malavasri (“Evarunnaru brova”) played from the vinyl record rendered by the then 26 year old D K Pattammal in her inimitable style, followed by Dikshita’s “Manasa Guruguha rupam” in Anandabhairavi – vide the extract of the day’s broadcast schedule from the “Indian Listener” pinned as the header to this post.

The same recording made by her close to 90 years ago can be heard here:

Yet another is a dance piece for listening- Kubera Stuti- in tisra eka tala set in the raga Malavasri.

The raga Malavasri belongs to the 22nd Mela (Kharaharapriya/Sriraga) taking the following svaras/murrcanas in its ascent and descent, according to the Sangita Sampradaya Pradarshini (SSP).

Mark the emphasis on the gandhara, madhyama and nishadha notes in the progression. This raga is an oddity for more than one reason for it also incorporates a few now-lost 18th century raga architectural attributes. While Natta, Gaula, Arabhi, Varali and Sri were the traditional ghana ragas (pancakam) of the first category, the ragas Reetigaula, Narayanagaula, , Bhauli, Malavasri and Saranganatta are the constituents of the dviteeya ghana pancakam.

Historical Background to the Raga:

The raga right through history has been recorded by musicologists and with the advent of the mela scheme, Venkatamakhin (1620 CE) as well as Shaji (circa 1700 CE) and Tulaja (circa 1732 CE), placed the raga as a shadava raga skipping rishabha altogether under Sriraga mela. And the raga is documented as-is in the Ragalakshanam of Muddu Venkatamakhin (circa 1750). Older texts while helping in validating the broad lakshanas of ragas, do not provide us with the intricate details or compositions and we are left to rely on the Sangita Sampradaya Pradarshini (SSP) of Subbarama Dikshita which details this raga for our benefit.

The SSP’s narrative provides us with this nominal raga structure for us.

Attention is invited to the vakra dhaivatha in the arohana and the SNDPM, SNDNPM, SNDNPM combinations that occur in the descent. Further Subbarama Dikshita asserts on the authority of the older texts that there are no sancaras beyond the madhya stayi. In fact, Muthusvami Dikshita’s kriti provided as an exemplar goes one step further as the raga is dealt with only between madhya gandhara and tara pancama, with no sancaras below.

The SSP documents the following compositions as exemplars of the raga, none of which are in currency on the modern concert stage.

The SSP apart from documenting the lakshya gitam ascribing it to Venkatamakhin as authority for the raga’s grammar also documents a unique gitam commencing as “manmadha naLa” called as “mukta-pada-grastham” whereby the ending syllabic constituent unit of the previous sahitya section becomes the first syllabic constituent of the succeeding sahitya portion. (andhadhi). Much like the Narayanagaula gitam documented in the SSP, this gitam must have been in currency and must have been a popular composition. It must be emphasized that gitas or gita prabhandas were the concise repositories of a raga’s lakshanas, encapsulating pithily the set of all possible svara combinations or murrcanas of the raga, akin to how we treat the varna in modern days.

A perusal of the said gita offers us vital clues as to this raga’s lakshana:

Apart from the SSP two other documented sources of this raga from olden times even antecedent to the SSP are as under:

The notation in italics is the tara sancara notes of the raga. This brief snippet of  the raga encompasses madhya stayi madhyama to tara stayi madhyama, emphasizing   nishadha madhyama notes, corresponding to the treatment of the raga in  “Mangalambayai Namaste” as we will see shortly. And while dhaivatha is vakra in the arohana, it is more seen vakra in the avarohana as well though a lineal SNDP is not forbidden. Vakra sancaras are de rigueur in this raga, which by incorporating multiple flows of murccanas follows the classical 18th century raga architecture.

It has to be pointed out that the raga’s lakshana as embodied in the SSP fully accords with the musical history right from the times of Venkatamakhin staying under the Sri raga mela and omitting rishabha. Both Sahaji and Tulaja in their works reinforce the same lakshana for the raga. Even the Sangraha Cudamani, the lexicon of the ragas of compositions of Tyagaraja omits rishaba in its structure and provides roughly the same arohana-avarohana krama for the raga.

And off course all musical texts are unanimous as to the rishabha being omitted and the raga being a upanga raga under 22nd mela.

Before we delve into the musical aspects of composition, let’s look at the sahitya and its meaning first:

sangIta sAhitya sArajna sannutE – O one celebrated by those who know the essence of music and literature,

mangaLa-Alaya gupta gangA taTa sthitE – O one dwelling in the auspicious temple on the bank of (the tank) Gupta Ganga,

indIvara-Asana-Adi-IDita      – O one acclaimed by the gods led by the lotus-seated Brahma!

From a musical aspect, the setting of the composition is itself very interesting.

In this section I present the my rendering of “Mangalambayai Namaste” to the best of abilities , keeping to my interpretation of the notation found in the SSP. I should hasten to add that errors and omissions are entirely mine.

In this context the following points are to be noted:

This magnum opus as published in the SSP, features the raga Malavasri as the 13th portion/khandika set in rAjacUdAmani tala. The notation shows traversal of Malavasri in the mandhara stayi upto the mandhara madhyama. And above all a considerable portion of the lyrics are notated in mandhara stayi in obvious discordance to Subbarama Dikshita’s own commentary that the raga does not permit sancaras below madhya sadja ! However the raga as delineated is otherwise in line with the stated lakshana of the raga being SGMPNNS/SNDPMGS.

Vidushi R S Jayalakshmi in Dec 2014 gave a lecture demonstration of this mammoth composition of Ramasvami Dikshita. In this Youtube Link she demonstrates the Malavasri portion starting 1:07:18 onwards.

Thus, Malavasri has always been a shadava raga of the Sriraga mela, omitting rishabha. And in the SSP as we see there are two other unique aspects:

The lyrics of the composition can be found here: http://thyagaraja-vaibhavam.blogspot.com/2007/09/thyagaraja-kriti-evarunnaaru-brova-raga.html

While the rendering of Smt D K Pattammal was presented earlier, the other rendering being that of Sangita Kalanidhi T V Sankaranarayanan is given below:

The following conclusions can be drawn from these renderings:

A cleaner version devoid of even a faint suggestion of rishabha in the said places in the kriti along with a sharper sadharana gandhara intonation, is this rendering of Vidvan Dileepkumar which is presented below:

The other kriti of Tyagaraja “ennalu tirigedi” of Tyagaraja is rendered by Dr Ritha Rajan which can be heard here: https://www.youtube.com/watch?v=UdvhTBoydpY

The evaluation of the musical material available to us shows that for Malavsri, the gitam as well as the kritis of Muthusvami Dikshita and Tyagaraja present an unalloyed and complete picture of the raga, which is sufficient for one to comprehend, understand and assimilate the raga, from the point of view of both a student and a performer. Further the raga as well as the Dikshita’s composition “Mangalambayai Namaste” can not only be rendered with practice but can be dealt with along with alapana, neraval and svaraprastara. By properly imbuing the composition and the raga lakshana therein, with fidelity to the notation and the intent of the composer, the composition can be performed competently. It is earnestly hoped that this beautiful composition with its uttaranga and upper register centric pivot, will be encountered more frequently on the concert circuit in the days to come.