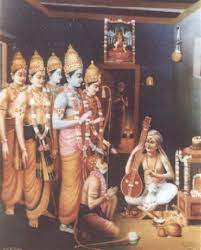 The term mangalam indicates auspiciousness amongst its many other denotation that it conveys. Mangalam is usually heard at the end of a Nama samkeertanam, Sita kalyanam or at the end of a concert to be propitious to both the listener and reciter.  Mangalam can be compared with the ‘phalastuthi’ recited at the end of any sloka and usually eulogizes a deity. Though presently very few mangalam-s are in vogue, each family inherited their own repertoire of mangalam-s in the past. The deity extolled here will a family deity or a deity enshrined in a town to which the family belongs to. This author has listened to his grandmother singing a mangalam addressing the Lord Devanatha of Tiruvahindrapuram in the ragam Kamavardhani. Also, age old mangalam-s runs in the family through the generations. ‘Sri ramachandranukku’, a common mangalam appended to Rama nataka kirtanam of Arunachala Kavi and often sung in Madhyamavathi is sung in Asaveri in this author’s family. Interestingly, the oldest book which mentions this kriti too gives Asaveri as the raga for this kriti.

Occasionally, mangalam-s were also composed on Saints and mortals. Though the sahityam of these compositions might superficially appear inconsequential, they provide a lot of biographical details, especially when they are composed by individuals who are closely associated with the nayaka of the mangalam.

Svamigal could have been one of the very few composers to have a lot of disciples. Many of them were also composers and two of them who are of interest to us are Valajapettai Venkataraman Bhagavathar and Manambuchavadi Venkatasubbaier.  Both of them have composed mangalam-s furnishing a lot of details about their Guru.

Venkatasubbaier was related to Svamigal and he had trained a lot of disciples like his preceptor. He was a composer and sadly, only a few of his compositions survive through few isolated recordings like ‘avarakuta’ in the ragam Kuthuhalam and a kriti ‘samiki sari’ in the ragam Devagandhari resounding the glory of his Guru. His unknown compositions include a ragamalika ‘sivabhupathe’ and a mangalam ‘giriraja pautraya’ on his teacher among others.

Many of us are benighted about this mangalam in the ragam Surati set to khanda chapu. Only the sahityam will be analyzed to know more about Svamigal, as provided by his direct disciple.Sahityam of this mangalam is provided first followed by a discussion on some of the salient details seen in this kriti (The sahityam provided here is taken from a thesis by Nityasri on the disciples of Manabuchavadi venkatasubbaier).

This is a mangalam composed in simple Sanskrit. This gives the geneology of svamigal starting from his grandfather. Mangalam start as ‘giritaja pautraya’ meaning the grandson of Giriraja. This indicates Giriraja was his paternal grandfather (dauhitra is the term to be used to denote maternal lineage), resolving the confusions surrounding the relationship between Svamigal and Giriraja. In the anupallavi, Venkatasubbaier says Svamigal was the blessed son of a brahmana by name Ramabrahma. Interestingly, the next line gives the sanyaasa diksha name of Svamigal, ‘naadabrahmaananda’ (this is a prevalent information given by various accounts covering the biography of Svamigal). Though, the occasion which saw the birth of this mangalam is not known, it could be speculated that this could have been composed after his beatitude. It is in this context, the line ‘panca nada tiraavataaraaya’ occurring in the caranam is to be studied.

There are controversies regarding the birth place of Svamigal. Whereas the predominant view is in support of Tiruvarur, few hold a view that Tiruvayyaru should get this privilege. Though outwardly seeing, this line might refer Tiruvayyaru as the avatara sthalam of Svamigal, when combined with the previously disclosed significance of the word ‘naadabrahmaananda’, it can be well presumed that ‘panca nada tiraavataaraaya’ might refer to the second birth place of Tyagaraja ; him taking the order of Sanyaasa and taking a new birth altogether as Naadabrahmaananda. This kriti also mentions Sitamma, his mother, and considers him as an amsa of Valmiki.

Guru kritis and Guru ashtakam of Venkataramana Bhagavathar are quite famous and require no introduction. What is less known is his mangalam on Svamigal. This mangalam with notation, tuned to Madhyamavathi and set to adi talam can be seen in the book by S Parthasaradhi, a disciple of Srinivasaraghavan. This kriti, with some additional carana-s  feature in Valajapettai transcripts, preserved at Government Oriental Manuscript Library, Chennai. This mangalam is seen interspersed with the transcript dealing with ‘Nauka Caritramu’ of Svamigal. Whether this mangalam was composed along with the said natakam (of Svamigal) by Bhagavathar or it was written just alongside the natakam by the scribe cannot be ascertained. Only the text of the mangalam is provided; no notations or raga – tala marking is seen.  This make us to doubt whether this was rendered as a kriti or recited only as a padyam. The text seen in the transcripts verbatim are provided first followed by analysis.

Sanskrit was the language used similar to the first mangalam. No distinction of the text into pallavi and carana-s can be noted.

This mangalam gives more insight into the biographical details of Svamigal. He starts with a mention about the ‘vamsa’ of Svamigal – Kakarla. He then proceeds to say he was the divine son of Ramabrahmam and Sitamma. He is the amsa of the Lord Sri Ramachandra itself and he had two wives – Parvati and Kamalaamba. This mangalam depose the incident wherein Svamigal had a vision of Sage Narada and blessed by him – ‘naaradaacharya karuna paatraaya’. He extols his Guru by using the phrases like the ‘one who is devoid of desire and greed’ (raaga lobha vimukthaaya), ‘well versed in sangita’(gaana saastra pravinaaya), ‘always surrounded by various disciples’ (naanaa sishya samuhaaya) etc., This mangalam does not mention about his diksha name or his place of birth. But, a biography written by Valajapettai father-duo affirms he was indeed born in Tiruvarur.

Svamigal was revered and extolled by more than one disciple, even during his lifetime. These two mangalam could have been composed at different occasions, though the exact event or incident that kindled them to compose is not known. Nevertheless, these mangalam-s stand as a testimony to know the personal details about Svamigal with an authority.