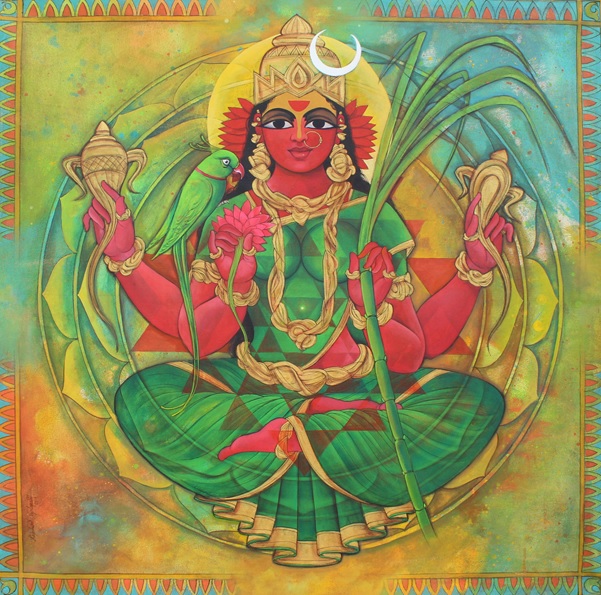 At the very outset before we deal with the raga Sarasvati Manohari as documented in the Sangita Sampradaya Pradarshini (SSP) of Subbarama Dikshita in this blog post, the following disclaimers are in order:

With these disclaimers in place, in this blog post we will embark on dissecting this old raga which is hardly ever rendered in the modern concert stage, save for the occasional rendering of just the kriti of Dikshita, sans alapana, neraval or svaraprastara.

It is reiterated that the raga Sarasvati Manohari of Dikshita is under Mela 29 (Sankarabharanam with N3) as documented in his composition “Sarasvati Manohari”, beginning on the raga mudra itself and no attempt should be made to corrupt the same and attempt to render it under Mela 28 by replacing the N3 with N2. There is no authority for it whatsoever in either the textual or the oral traditions.

Contours of the raga as found in Dikshita’s Composition:

On an entirely different note it can be demonstrated that the kritis of Muthusvami Dikshita are best understood by triaging the lakshana as found in the composition with the stated grammar of the raga in the “Triad” of musical works which are Sahaji’s “Raga Lakshanamu” (circa 1700 AD), Tulaja’s “Saramruta” (circa 1832 AD) and the “Ragalakshanam” of Muddu Venkatamakhin ( circa 1750 AD) being the Anubandha to the original Caturdandi Prakashika of Venkatamakhin ( the main text which is dateable to circa 1620 AD).

The SSP records for us by way of a snapshot, the composition (being the notation) and the raga lakshana which is the sole basis for this blog post and the analysis thereof. In the instant case, the treatment of the raga Sarasvati Manohari by Dikshita will be investigated to derive a proper understanding by solely looking at:

This blog post has to be read focussing only on the above and any other extraneous material outside of the above is patently irrelevant for the subject on hand and hence a discussion on those is safely avoided. And which is why the aforesaid disclaimers become important in the context of this discourse.

The raga according to Subbarama Dikshita:

The SSP records the lakshana of the raga strictly in line with the “Ragalakshanam” of Muddu Venkatamakhin (circa 1750 AD) along with Subbarama Dikshita’s commentary and does not record the lakshana as found in the works of Sahaji and Tulaja. According to the SSP the following are the features of the raga:

The perusal of the SSP would reveal the following beyond Subbarama Dikshita’s narrative.

Armed with the above details let us look at the evidence provided by Sahaji and Tulaja in their respective works as to this raga.

In fact amongst the Triad, Sahaji and Tulaja are completely ad idem on the lakshana while Muddu Venkatamakhin alone strikes the sole discordant note by allowing DNS prayoga. However, Subbarama Dikshita explains away this sole discordance stating that DNS is not seen in practice.

Summary of the raga lakshana according to the Triad:

From the foregoing the raga lakshana can be restated in the classical 18th century vernacular as under:

The notation of the Dikshita composition which begins with the raga name itself as its refrain reveals the following:

Key take-ways from the analysis:

In summary the difference between the ragas is slender and the Dikshita composition does well to capture the difference and also emphasizing the d/R prayoga given that rishabha is a much muted svara in modern Kannada.

It has to be recorded that “Sri Matrubhutam” of Muthusvami Dikshita is today rendered only in modern Kannada, thoroughly eschewing the N2 note which is supposed to dominate the raga Kannada according to SSP, which classes the raga under Mela 28, with N3 being an anya svara ( a bashanga janya under Mela 28).

From a practical perspective Sarasvati Manohari can be distinguished by emphasizing SRGM and SNDP prayogas along with d/RR, D/rr so as to safely keep Kannada out of the ken of the raga delineation.

The “Dikshitar Keertanai Prakashikai” (DKP) published by Tiruppamburam Natarajasundaram Pillai (a disciple of Satanur Panju Iyer of the Dikshita sisya parampara) records this composition only under Mela 29without any ambiguity whatsoever. In fact, this composition was taught both to Natarajasundaram Pillai and to Veena Dhanammal by Satanur Panju Iyer who was their guru and it can be seen that the version tallies if the notation in DKP is compared with the oral version of the composition as sung by Sangita Kalanidhi Smt T Brinda, the scion of the Dhanammal tradition.

Apart from this the version of the composition as rendered by Sangita Kalanidhi Smt D K Pattammal, who in turn traces her pAtham to Justice T L Venkatrama Iyer and on to Ambi Dikshita son of Subbarama Dikshita, is aligned to the version as seen in the SSP.

We will review these two oral versions in the discography section.

sarasvatI manOhari             – O one who captivates the heart of Goddess Sarasvati!

akAra-Adi-akshara svarUpiNi    – O embodiment of all the letters beginning with “a”!

vijaya kAncI nagara nivAsini   – O one dwelling in the victorious city of Kanchi!

It can be seen from the composition that:

Apart from this solitaire, the raga is also found featured in the ragamalika which is found documented in the Anubandha to the SSP. There are those who argue that this ragamalika being bereft of Dikshita’s colophon “guruguha” is not his but that of Ramasvami Dikshita. Be that as it may, Subbarama Dikshita has assigned the same to Muthusvami Dikshita in the Anubandha. The said ragamalika features ragas which are only janyas of Mela 29 Sankarabharana and they being Purnchandrika, Narayani, Saravati Manohari, Suddha Vasantha, Hamsadhvani and Nagadhvani.

As can be seen the motif d/R being Dikshita’s novelty or improvisation as to this raga is seen employed with the overall grammar of the raga being in accordance with what is seen in the kriti “Sarasvati Manohari”. This can perhaps be taken as a point of evidence that this composition is likely to be Dikshita’s given the employment of his novel leitmotif, which is not seen in the generic raga lakshana.

(Google/Yahoo ID would be required. Hit the URL and scroll down the items listed in the page)

Sangita Kalanidhi M Balamuralikrishna renders “Purna candra bimba” in this recording. Saravati Manohari portion is featured between 3:36 -4:10. The said portion of the rendering accords with the notation found in the Anubandha for the composition.

Musical history must be properly evaluated and understood and due regard must be had to the authentic versions of the compositions as passed on to us. The fact that raga name Sarasvati Manohari came to be wrongly assigned to the raga of “Entha Veduko” should be acknowledged which would help us in appreciating the creations of both Tyagaraja and Dikshita for their individual beauty, without any confusion whatsoever. Tyagaraja spun many nouveau ragas which weren’t in existence prior to his times and his kritis are the sole exemplars for those ragas. The raga of “Entha veduko” too is one such creation of his, which must have been assigned a new name, instead of repurposing an existing older raga name causing confusion for all concerned. Further no normalization should be inflicted by attempting to render Dikshita’s kriti with N2 or Tyagaraja’s with N3. Each kriti should be preserved and sung as documented. And if we do this Sarasvati Manohari is no conundrum for anyone.

It is indeed sad that discussions and lecture demonstrations are held, the subject being how the same raga has apparently been dealt with differently by Dikshita and Tyagaraja, without realizing the folly committed in the late 19th century and perpetuated into the 20th century and till date. It is humbly submitted and hoped that the Music Academy will  take the lead in documenting this anomaly formally and assign newer names to these ragas of Tyagaraja so that the same is not just recorded for posterity but also serves to illuminate students and  listeners alike, with the confusion being avoided once and for all.

The Kamakshi icon painting, being the featured image in this blog post heading is by artist Shri Rajeshwar Nyalapalli and was sourced from his online webstore.