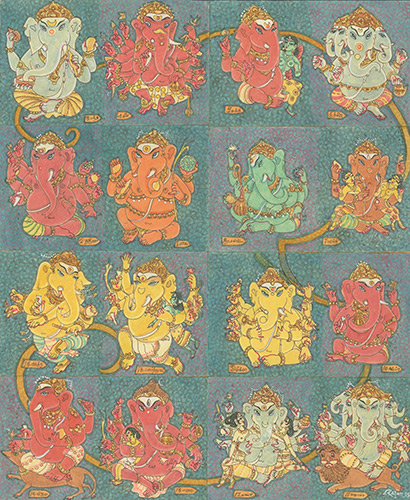 (Dhyana  Sloka of Lord Mahaganapati from the Mudgala Purana)

Meaning: I sing the praise of the great red hued Lord  with the countenance of the King of Elephants, who wears the moon, has three eyes, embracing his beloved atop his lap with His lotus like hands and who holds the pomegranate , mace, sugarcane bow, discus, blue lotus flower, noose , broken tusk and bejewelled pitcher.

Legend has it that Muthusvami Dikshita composed a set of kritis on the Shodasa Ganapatis (16 forms of Lord Ganesa) But no mention of this so-called set is found expressed in the “Sangita Sampradaya Pradarshini” (“SSP”) of Subbarama
Dikshita. One amongst this so-called set is this composition “hastivadanAya namastubhyam” in the raga Navaroz or Navaroj set in misra eka tala and is found notated in the SSP.

In this blog post to celebrate the upcoming Ganesa Caturthi festival, we will delve into this composition which is a magnum opus both from a lyrical and musical perspective. In other words, a musical tour de force by Dikshita. It is also available to us from the oral traditions in the sisya parampara of Muthusvami Dikshita which we will see in the discography section.

The lyrics of this kriti together with the meaning is as under:

samasta
bhakta-anugrahAya – the bestower of grace on all devotees,

mAyA-Alingita
vigrahAya–    the one whose form is embraced
by the goddess who signifies Maya-Shakti (the power of illusion),

kamala-utpala
pASa Sankha cakra-ikshu-kArmuka vrIhyagra gadA nija vishANa – mAtulanga ratna
kalaSa dharaNa kara-ambujAya -the one who has lotus-like hands that hold a
lotus, a water-lily, a noose, a conch, a discus, a sugarcane bow, rice stalks,
a mace, his own (broken) tusk, a pomegranate and a bejewelled pitcher;

viSva-utpatti
sthiti vilayAya –the agent of creation, protection and destruction of the
universe,

umA
ramaNa kumAra guruguha-samAnavaraOjasE –the one who equals
Guruguha, the son of Shiva (husband of Uma), in vigour and splendour,

The dhyana
sloka of the Mahaganapati form of Lord Ganesa as found in the Mudgala Purana
provides the iconography of this form. It can be seen that the same is fully
reflected in the composition.

Architecture
of the song:

At the
very outset in the pallavi, Dikshita captures for us the high level and the
overall perceptible visual setting of the Lord – his elephantine countenance,
the throne on which he is seated and the environ, being the golden pavilion and
he pays obeisance to Him.

Next in
the anupallavi, even while he keeps his date with the dviteeyakshara prasa,
Dikshita proceeds to praise Him on four aspects before looping back to the
pallavi:

Lord Shiva himself propitiating Him- ahead of the destruction
of Tripura– the allusion to Lord Shiva as the One wearing elephant hide
is reminiscent of the poet Kalidasa’s invocatory sloka of his play Malavikagnimitram
referring to Him as “krittivAsa”
Him being the benefactor of all devotees – this
again is an epithet which is found as well in the other kriti of Dikshita “guruguhAya
bhaktAnugrahAya” in the raga Sama.
Him being the embodiment of truth and lastly
Him being the one who encompasses mAyA –
the illusory world.

Next the
construct of the carana is a wonderous conceptualization by Dikshita. What
stands out in this magnificent composition is the remarkable way in which the
form – the iconography of Mahaganapati- has been described by Dikshita in
the first two lines of the carana which runs continuously thus:

Taking the
cue from the Mudgala Purana dhyana sloka but yet fleshing it out in the
composition for keeping prAsA, ordering them so as to segue with the
tala by stretching & contracting the lyrics (ordering the hrasva-dhIrgha
syllables) and investing it with the unalloyed melody of Navaroj, Dikshita
paints the picture of the great Lord. This style of recording the iconography
is similar to the way he has done in “Pancamatanga
mukha” in Malahari and “ucchista ganapatou” in Ramakriya, for
instance. We also did see in an earlier blog post how Dikshita depicted the
Devi as Goddess Kamesvari, in the Sahana kriti “IsAnAdhi
sivAkAra mancE”, turning the composition into a melodic pen picture,
describing Her iconography in detail.

And then
in the carana, after this iconographic depiction Dikshita reverts to a couple
of paeans adulatory of Him and then as a crowning glory or the crescendo of this
kriti he appends the madhyama kala sahitya to this composition which
encompasses the entire lyrical and musical essence he has to offer. He
dexterously meshes in the raga mudra in the lyric “samAnavarOjasE”
along with his own colophon “guruguha”, to mean that the Lord
is as splendorous as His equally illustrious sibling Guruguha or Lord
Subramanya. Dikshita to complete the lyrical text of the composition and also
to keep prAsA in place, prefixes a relationship-based reference to Lord
Subramanya as “.umA ramana kumAra guruguha”. This lyrical contraption is
reminiscent of the reference “murArI snushAkAniramjani” used in the
kriti “kalAvati kamalAsanayuvati” in the raga Kalavati and ‘himAdri
jAmAtri jambUpati sahitE” in “srI mAtAh sivavAmAkE” in Begada. The
usage of the word “Ojas” and its usage to complete the raga mudra herein
can be cited as authority for the raga naming being “Navaroj”.

And
needless to add, Dikshita packs the very essence of the raga Navaroj in this
madhyama kala sahitya. It is no surprise that both Dr V Raghavan and Sangita
Kalanidhi T L Venkatarama Iyer, the main biographers of Muthusvami Dikshita,
wax eloquently and go rapturous over this Navaroj composition in their works.
See Foot Note 2.

No other
context of the composition or the stala of this Mahaganapati
dealt with in this kriti is discernible from the composition per se.
It is highly likely that somewhere in the sprawling complex of the Tiruvarur
Tyagaraja Temple this form of Lord Ganesa i.e. Mahaganapathi is found
enshrined in one of its innumerable sanctums and Muthusvami Dikshita has
propitiated that icon with this composition.

The raga
Navaroj or Navaroz or Navarasam as it is called in Kathakali music is a scalar
derivative of Sankarabharana sung in madhyama sruti. It is a raga not seen
documented by Sahaji (1700AD) or Tulaja (1735 AD) or by anybody prior such as
Venkatamakhin (circa 1620 AD). Sahaji and Tulaja have on the contrary
documented the sibling raga Kurinji which we saw in an earlier blog post. Arguably
the raga Navaroj has been first listed out only in the Anubandha to the Caturdandi
Prakashika attributable to Muddu Venkatamakhin and dateable to circa 1750
AD. We do have two pre-trinity period compositions in this raga, but
nevertheless from a musicological perspective the Anubandha can be considered as
the first text to document the melody.

The
commentary of this raga by Subbarama Dikshita in the SSP (1904 AD) forms the
bedrock for us to comprehend this raga. We will understand this raga in two
parts- one as documented by Subburama Dikshita and secondly by comparing it
with Kurinji.

The raga progresses thus – p d n S R G M P and P M
G R S n d p under mela 29, from the mandhara pancama to the madhya pancama and
back.
Dhaivatha, gandhara and rishabha are the key life-giving
notes of the raga
The madhya stayi pancama is only touched rarely (alpa
prayoga) in practice and practically the madhyama note is the upper bound
of the raga.
The raga can be illustrated with a number of native
phrases.

Apart
from a lakshya gitam and his own sancari, the solitaire “Hastivadanaya
Namastubhyam” of Muthusvami Dikshita in misra eka tala (7 beats kept
as a laghu, being a clap of the hand followed by six finger counts) is provided
by Subbarama Dikshita in the SSP as an exemplar for the raga. It has to be
pointed out that the kriti is typically rendered in misra capu tala in
practice.

The raga Navaroj corresponds to the ancient “kolli
pann” of Tamil music.
Navaroj is a pancamAntya janya raga of
Sankarabharana, traversing from mandhara pancama to the madhya pancama with the
notes R2, G3, M1, P, D2 and N3.
Traversal beyond madhya stayi pancama is forbidden
in this raga and therefore for ranjakatva it is always sung in madhyama
sruti.
Sndn\p – the movement from the madhya sadja to the
mandhara pancama is the life blood of that raga wherein the glide from the
nishadha to the pancama via the jAru gamaka (glissando) distinguishes
the raga.
The raga is found in popular music especially in
lAli, oonjal and lullaby songs.

The raga
Navaroj differs from Kurinji on three key aspects:

Kuranji spans upto madhya dhaivatha
(nSRGMPD/DPMGRSn) whereas Navaroj (pdnSRGMP/PMGRSndp) spans only upto madhya
pancama. Curiously the respective top notes in both the ragas are touched only
sparingly.
Kurinji eschews SRGM and instead uses only
SMGM-RGM in its purvanga. No such limitation is seen in Navaroj in its purvanga.
In Kurinji the mandhara nishadha is the lower
bound note with the occasional s\pS occurring. Au contraire, the
expression “Sndp” or more importantly “Sndnp” occurs prolifically in Navaroj as
a leitmotif in the mandhara stayi.

And both
Kurinji and Navaroj are avowed madhyama sruti ragas as seen from modern day
practice.

I seek to present three renderings of this compositions each one a beauty in itself. And as primus inter pares, I first present the version available to us from the oral tradition, that of the Veena Dhanammal family, tracing its way to Dikshita himself via Sathanur Pancanada Iyer and Tambiyappan Pillai. Vidushis T Brinda & T Mukta present this bewitching composition in this recording. It is a fact that this composition along with others including “vInA pustaka dhArinIm” in Vegavauhini (khanda eka) is considered an exclusive heirloom of Veena Dhanammal’s family for their exquisite rendering of the composition.

Presented next is the rendering of the composition by Vidvan T Visvanathan of same Dhanammal lineage as he learnt it from his mother.

Presented next is “Dikshitarini” Vidusi Kalpagam Svaminathan, soulfully playing it on the veena in this rare video, recorded for posterity.

The composition is deeply meditative and contemplative in its construction, loaded with both sangita and sahitya bhava in equal measure. It is a pity that the kriti is not heard in concert halls these days. As an exception, Sangita Kala Acharya Vidusi Smt. Seetha Rajan is her rare concert performances frequently features this in the second half of her recital towards the fag end. Its hoped that the composition is rendered frequently in the days to come, doing full justice to its musical and lyrical content in full measure.

The oral tradition or pAthams of the kritis of Muthusvami Dikshita are available
to us today only through two main lines or lineages. One is the lineage
emanating from Dikshita on to his disciple Tambiappan Pillai and on to Sathanur
Pancanada Iyer and finally to Dhanammal and Tiruppamburam Natarajasundaram
Pillai. The second line traces through from Subbarama Dikshita on to his son
Ambi Dikshita and then on to Justice T L Venkatarama Iyer, Kallidaikurici
Vedanta Bhagavathar, D K Pattammal and others who learnt from Ambi Dikshita. We
do not have any other musicians surviving today who trace back to Muthusvami
Dikshita through any other sisya parampara lineage, though Subbarama
Dikshita records a number of his disciples of Dikshita such as Tirukkadaiyur
Bharati, Tevur Subramanya Iyer & others. The transmission of songs through
the line of Tanjore Quartet is at best minor and not much has been gleaned from
this lineage by way of authority for the compositions of Dikshita.
Vidvan R K Sriramkumar always covers this Navaroj composition in his lecture demonstrations
of Dikshita’s compositions. Once such instance is this one: https://www.youtube.com/watch?v=MDp7rIpmPss&t=678s wherein he demonstrates “Hastivadanaya” from 8:00 to 14:43 in this recording.